Today, the RCAF marked the arrival of the first aircraft of its future fixed-wing search and rescue fleet. The new fleet will be called Kingfisher. Within the First Nations of the Northwest, the kingfisher has long been recognized for its speed and agility, as well as its keen searching and hunting skills. Found all across Canada, the kingfisher well represents the abilities of our own search and rescue crews to accomplish their lifesaving role.

Specifically designed to perform search and rescue missions across Canada, the aircraft is equipped with integrated sensors that will allow crews to locate persons or objects from more than 40 kilometers away, even in low-light conditions. Its communications systems will increase interoperability with other search and rescue assets, such as the CH-149 Cormorant. The fleet of 16 aircraft will be replacing the CC-115 Buffalo and CC-130H Hercules fleets in their search and rescue role at four locations across Canada, and represents a value of $2.4 billion.

The aircraft received earlier this month will remain at 19 Wing Comox while the RCAF completes aircrew training, followed by operational testing. During the transition period and while the CC-295 Kingfisher is being operationalized, fixed-wing search and rescue services will continue through existing fleets, along with the CH-149 Cormorant and CH-146 Griffon helicopters.

The delivery of this aircraft marks an exciting new chapter in Canada’s long and proud search and rescue history, and this project has created hundreds of new jobs for Canadians. The CC-295 contractor, Airbus Defence and Space, continues to make investments into the Canadian aerospace and defence industry through the Industrial and Technological Benefits Policy. Strategic work packages directly related to the aircraft are providing Canadian companies the opportunity to participate in global supply chains and creating high-value jobs.

Harjit S. Sajjan, Minister of National Defence stated, “As outlined in Canada’s defence policy, Strong, Secure, Engaged, it is essential that our search and rescue crews have the modern and effective aircraft they need to carry out this critical work. I am thrilled at the arrival of this first CC-295 Kingfisher in Comox as it represents another successful milestone for this project, while also supporting our mission of being strong at home.”

Navdeep Bains, Minister of Innovation, Science and Industry commented, “As Canada welcomes its new fixed-wing search and rescue aircraft, our government also welcomes the many jobs and investments this procurement is generating for the Canadian economy. Important economic benefits through the Industrial and Technological Benefits Policy are helping our economy to grow and move forward through this challenging time.”

"Airbus is really proud to be able to celebrate this important milestone: the arrival of the first out of 16 Fixed Wing Search and Rescue C295 at the Canadian Forces Base Comox. Thanks to the excellent collaboration with Canadian officials we have overcome the challenges caused by COVID-19 and we were able to deliver the aircraft. Despite the current pandemic, we are confident of achieving the program target of six deliveries by the end of this year. We look forward to our continued collaboration and to the C295 Canada", said Airbus Defence and Space Chief Executive Officer, Dirk Hoke, on a video statement displayed during an official event held today at the 19 Wing Comox Air Base.

Airbus has formally delivered three aircraft to date, the second of which is scheduled to arrive in Canada in the coming weeks. Deliveries will continue until 2022.

A $2.4 billion contract (including taxes) for 16 new CC-295 fixed-wing search and rescue aircraft to replace Canada’s fleets of Buffalo and Hercules H aircraft was awarded to Airbus Defence and Space on December 1, 2016. The contract is for a period of 11 years, with the option to extend up to an additional 15 years of in-service support.

This first aircraft, tail number 501, was formally accepted by Canada in Spain on December 18, 2019, and has now been delivered to Comox following additional testing and evaluations.

A maintenance trainer aircraft arrived at 19 Wing Comox, B.C. in February 2020. This aircraft was disassembled upon arrival, and reassembled inside the new training centre.

The CC-295 Kingfisher will be based in Comox, Trenton, Greenwood, and Winnipeg. The aircraft will arrive in phases as crews are trained in turn at each location.

Part of this project includes the construction of a new training centre, which is being built in Comox by Canadian training leader CAE. It includes ten classrooms, as well as sophisticated training devices such as a full-flight simulator, a cockpit procedures trainer, a sensor station simulator, and an aircraft maintenance trainer. The centre will be used to train both maintenance and aircrews.

Canadian company AirPro will provide day-to-day management of all in-service support for the provision of engineering, logistics, maintenance, training, IT systems, infrastructure and materiel support throughout the contracted CC-295 life cycle.

Canada’s Industrial and Technological Benefits (ITB) Policy applies to this contract, ensuring that Airbus Defence and Space invests an amount equal to the value of the contract in the Canadian economy. Significant high-value jobs have been and will continue to be generated from this contract with Canadian companies such as PAL Aerospace, Pratt and Whitney Canada, CAE, and AirPro. 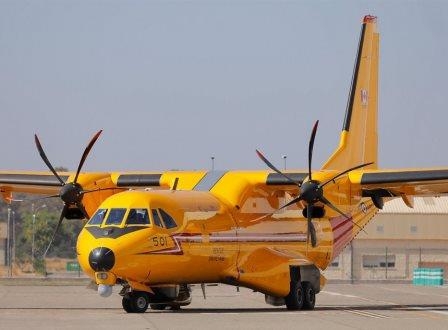