OTTAWA -- Warship repair contracts worth $1 billion will be split evenly between two shipyards, with a third deal on the way, the federal government announced Tuesday.

The Davie shipyard in Quebec and Seaspan Victoria Shipyards in British Columbia were each awarded a $500-million contract for maintenance work on the country's fleet of 12 Halifax-class frigates.

A similar deal with Irving Shipyards in Nova Scotia is being finalized now, the government said. In an emailed statement, Irving said details of its contract with the government would be released "in the near future."

The contracts announced Tuesday cover a five-year period, with the value expected to rise as the government adds more work.

The federal government has promised to invest $7.5 billion to maintain the 12 frigates over the remainder of their operational lifespans, which are expected to last about 20 more years.

The oldest of the ships, HMCS Halifax, has been in service for 27 years. All recently underwent significant refits and modernizations.

Each shipyard will be responsible for refitting a minimum of three frigates each and work will begin in the early 2020s, the government announcement said.

In an emailed statement, Public Services and Procurement Canada said the work on the ships would be scheduled to ensure the fleet maintains operational readiness.

It said shipyards will be eligible for additional work based on performance.

"Each shipyard will have the opportunity to receive a minimum of $2 billion in maintenance contracts until the Halifax-class frigates (have) reached their end of the life cycle. The exact amount each shipyard receives will depend on several factors such as ship condition and performance," the statement said.

The Halifax-class frigates will eventually be replaced by new warships set for construction under the National Shipbuilding Strategy.

Davie was left out of the massive naval procurement program in 2011 because it was suffering from financial troubles at the time.

But it has since advocated to be allowed to participate in the wider program.

Cabinet minister and Quebec City Liberal MP Jean-Yves Duclos, who delivered the government announcement at the Davie facilities across the St. Lawrence River in Levis, Que., said parts of the National Shipbuilding Strategy have been delayed "because the Davie shipyard was excluded from the Conservative strategy for naval construction."

Duclos said this was an "error" that was "important to admit to" so that it could be more easily fixed.

That was part of why the government announced "structural investments that are long-term for Quebec, for Quebec City and for Canada as a whole," Duclos said.

Duclos won his riding by just under two percentage points in 2015.

The government announcement said the investment will sustain or create 400 jobs at each shipyard. 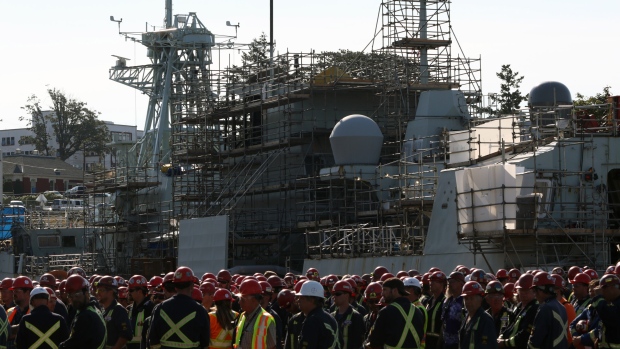