Harold Phillips spent a lot of time this summer by the backyard pool — but it was no play and all work.

Phillips does the final testing on every underwater drone that's shipped from MarineNav's secluded factory on Panmure Island, P.E.I.

"We do a soft test here in our pool just to ensure there are no leaks and that all of the flight controls and avionics are working properly," Phillips said, as he pilots two remotely operated vehicles (ROVs) that zip through the water.

"And then we go off shore and we go for an open water dive where we take it to depth and again ensure that everything is functioning correctly," he said.

Up until 18 months ago, when MarineNav first started selling and building its Oceanus line of ROVs, the company had kept a low profile — mostly because the marine-grade computers and displays it builds include components that have military or national security significance.

"We're a controlled-goods facility and we ship all over the world — navies, coast guards and law enforcement customers," Phillips said.

"But by doing so, it also limits the amount of publicity you can attach to those projects."

'It just turned into a manufacturing facility'

The facility is located in thick woods down a long gravel road and looks more like a giant luxury home than a high-tech factory until you go inside.

"The original concept was to become a home but then it just turned into a manufacturing facility and the product has grown and grown over the years," Phillips said.

Over the years, MarineNav has put together a skilled workforce of 22 employees. "You have to have people who are schooled in design, engineering, electrical, coders, and programmers," he said.

In 2016, the company decided to use its expertise and industry contacts to start another venture. It spent 18 months designing the ROV, as well as its display screens and controllers.

"By keeping everything in-house, designing and manufacturing, we get an extremely high Canadian content value, which is very important," Phillips said.

When MarineNav couldn't find a part — or if it did find one and the quality wasn't up to par — the company decided to design and build its own parts.

Phillips believes that despite competition from other manufacturers, his company's made-in-P.E.I. ROVs deliver more power.

"Most ROVs of this size and class would only have three thrusters — two horizontal thrusters and one vertical thruster," Phillips said.

"We've doubled that, so four horizontal and two vertical, giving you a lot more lift, a lot more speed through the water as well as being able to navigate unforgiving conditions like current and tide."

Phillips said his clients need that extra power to go where divers can't. "An environment where it's just not safe to put a diver into — a fast flowing river or a lot of current, heavy pollution."

The pro model has a depth rating of more than 300 metres, while a scuba diver can't surpass more than about 45 metres.

'Can just keep going and going'

"So that leaves a lot of real estate and opportunity for an ROV to explore and stay down indefinitely and does not fatigue from cold or dirty or inclement water," Phillips said.

"It can just keep going and going."

But as with anything that keeps on going and going, quality comes at a price. A hybrid model starts at about $20,000 USD while the pro model costs $40,000 USD, plus accessories.

"You factor in what it costs for a dive team to go out and do an investigation for a day and you'll quickly realize the value of an ROV," Phillips said.

The company is expanding its horizons beyond law enforcement and rescue applications into the aquaculture industry.

"So they're using them in fish nets, monitoring fish stocks, an environment that's very dangerous and uninviting for a scuba diver, so it's an ideal place for the ROV to work," he said.

The company hasn't sold any ROVs in its home province yet. "Not to say that we haven't been in talks with local industry for an ROV, but it's a process for sure."

Meanwhile, one of the company's ROVs was used in a recent search-and-recovery operation in 30 metres of water off P.E.I.

The company recently received an unusual request from a U.K. TV network planning to do a documentary on the Scottish folklore creature, the Loch Ness Monster.

"The project has been rescheduled for Spring 2020 and we may still partake as we now have a strong presence in the U.K.," Phillips said.

MarineNav is now hiring more staff at its P.E.I. facility. Phillips sees a bright future for its line of Oceanus ROVs.

"It's a big world and there's a lot of ocean, so our potential over the next five years could be very, very large." 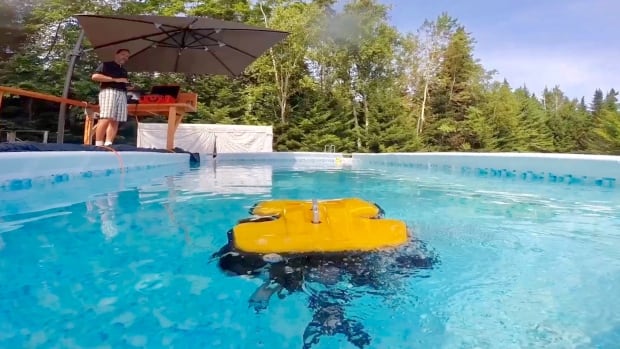