In the midst of a pandemic, a Nova Scotia consortium has come up with a prototype ventilator.

Doug Milburn, co-founder and vice-president of Sydney manufacturer Protocase, the company that leads the consortium, said the group is working with Health Canada to get its design approved as soon as possible.

"We will have a working ventilator that could keep somebody alive in another one to two weeks and then the unknown when we get to the end of that, when it gets certified, is another matter," he said.

There is a worldwide shortage of ventilator components as health-care providers and governments scramble to ensure enough can be made available if hospitals get overwhelmed by COVID-19 patients needing help breathing, Milburn said.

"The challenge in ventilators is the whole developed world is in the process of buying up everything they possibly can, so the whole medical supply chain is completely stressed," he said.

Protocase can build the machines locally from custom-made parts and others that are available for purchase, said Milburn.

Its medical consultants are Milburn's brother, Dr. Chris Milburn, who is chief of emergency medicine for the Nova Scotia Health Authority's Eastern Zone, and Bruce Morrison, a respiratory specialist with the health authority.

The province has not needed to put all of its ventilators to use yet, but Milburn said medical professionals are eager to have extras on hand.

"I'm not a medical doctor, although we certainly have one on our team," he said.

"Their view of it? If it really turned into crisis mode, it would be awfully nice if they wouldn't have to make hard decisions about who goes on a ventilator and who doesn't."

Millburn said the prototype has all of the components a commercial ventilator has, but some of the functions are manual instead of automatic.

Making the machines quickly and easily was a priority, but keeping the cost down was also a major consideration, he said.

"There's not a crisis here, there's a potential crisis and this is about emergency preparedness," Milburn said.

"From what it looks like right now, we'll be in the ballpark of about a tenth of the cost of a standard ventilator."

Getting medical certification would normally take months, but Health Canada is working with the consortium to fast-track the process, said Milburn.

A spokesperson for the Nova Scotia Health Authority said in an email its officials met with Protocase last week and offered to help with an application to Health Canada, but could not comment further. 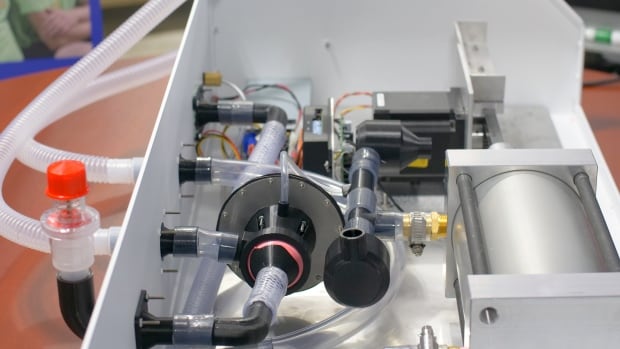