The Liberal government has awarded a $2.4 billion contract to finish the overall construction of the navy's long-awaited supply ships.

Today's announcement moves forward a Joint Support Ship program over a decade-and-a-half in the making. It also appears to signal the federal government remains committed to its multi-billion shipbuilding program despite record levels of pandemic-driven federal deficit spending.

The contract, with Seaspan's Vancouver Shipyards, is for the construction of two replenishment vessels, Public Services and Procurement Canada said in a statement.

Now that the construction deal has been signed, the overall price tag of the program — including design — is expected to be $4.1 billion, up from an earlier estimate of $3.4 billion.

Seven years ago, the Parliamentary Budget Office (PBO) predicted the cost would end up where it has — an estimate that was roundly criticized and dismissed by the Conservatives, who were in power at the time.

"The government announcement today did not have a whole ton of detail, so it's hard to do an exact comparison, but I certainly think that PBO estimate from a long time ago has held up pretty well over time," said Dave Perry, an expert in defence procurement and vice president of the Canadian Global Affairs Institute.

The first supply ship is to be delivered in 2023, and the second vessel is supposed to arrive two years later.

The yard started construction on certain portions of the first ship in 2018, while final design work was still underway — something that alarmed and even baffled some defence and shipbuilding experts.

With the federal deficit expected to swell to over $252.1 billion because of COVID-19 relief measures, many in the defence community had been speculating that existing spending plans for the supply ships would be curtailed or scaled back.

In a statement, federal Public Services Minister Anita Anand suggested the Liberal government is committed to staying the course.

"This contract award is yet another example of our ongoing commitment to the National Shipbuilding Strategy, which is supporting a strong and sustainable marine sector in Canada," she said.

Perry said he takes it as a sign the Liberals intend to proceed with their defence construction plans in the face of fiscal and economic uncertainty.

"It is an indicator that, despite being business under some very unusual circumstances, it is still government business-as-usual under COVID," he said.

In the same government statement, Defence Minister Harjit Sajjan pointed out that an enormous amount of preparation work has been done already and he's pleased the project is moving forward.

"An impressive amount of work has already gone into the construction of these new ships, and I look forward to their arrival in the coming years." said Sajjan.

A senior executive at Seaspan said work to adapt the design from the original German plan (the Canadian ship is based on the German Navy's Berlin-Class replenishment vessel) was completed last year and work on the superstructure of the first Joint Support Ship — started in 2018 — has been proceeding apace, even through the pandemic.

"It is well advanced," said Amy MacLeod, the company's vice-president of corporate affairs. "We are ready to continue. We're very, very happy with the quality of the ship, the progress of the ship, the momentum that we have and the expertise we have gained."

The shipyard did not pause construction due to the pandemic — but it did have to figure out ways to carry on under strict physical distancing rules.

"We, like everybody else, had to understand how to run a business in a pandemic," said MacLeod. "We made a lot of changes on how we build our ships."

Turnstiles to enter and exit the yard were eliminated and the company went high-tech with a "heat map" that shows where everyone is working and how much space there is between individual workers.

"And where we couldn't ensure appropriate social distancing because of COVID, we stopped that work."

Perry said the gap between the construction of the two supply ships worries him to a degree. Seaspan intends to construct an ocean science vessel for the coast guard under a plan agreed to with the Liberal government in 2019.

Any delay or hiccup in the construction of that ship could mean the delivery of the second naval vessel is pushed back even further, Perry said.

News of the contract will come as a relief to the navy.

Having replenishment ships to refuel and rearm frigates would allow the navy to deploy entire task groups to far-flung parts of the world.

"With these warships, the Royal Canadian Navy will be able to operate with even greater flexibility and endurance," said Vice-Admiral Art McDonald, commander of the navy.

"These ships will not only form part of the core of our naval task groups, they also represent a vital and strategic national asset that will enable the Navy to maintain its global reach and staying power."

It was 1994 when the replacement program was first discussed. The deficit-slashing years of that decade meant the plan was shelved.

Resurrected in 2004, the Liberal government of former prime minister Paul Martin hoped to have the ships in the water by 2008 to replace the three-decade-old supply ships the navy had been operating.

Faced with cost estimates well over what they had expected, the Conservative government of former prime minister Stephen Harper shelved the Liberal plan on the eve of the 2008 federal election.

More than five years later, the navy was forced to retire both aging supply ships after one of them was crippled by a devastating fire.

The absence of replenishment capability led the Harper government to lease a converted civilian supply ship from a private company, Federal Fleet Services, which operates out of the Davie Shipyard in Levis, Que.

That plan led to a political and legal scandal when the former commander of the navy, Vice-Admiral Mark Norman, was accused of leaking cabinet secrets related to the plan. The Crown withdrew the charge a year ago after a protracted pre-trial court battle. 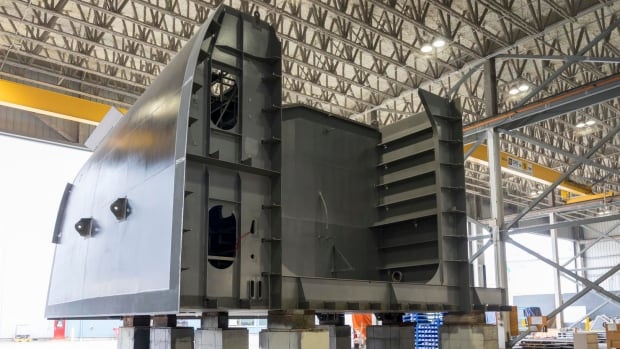