Irving company secures warship maintenance contract worth up to $552M

A J.D. Irving company has been awarded a federal government contract to maintain Canada's current fleet of warships in a deal that could be worth up to $552 million over the next 22 years.

Halifax-based Fleetway Inc. will carry out in-service support for systems engineering and technical data management for the 12 Halifax-class frigates, the Department of National Defence announced Monday.

Last summer, Ottawa said it would spend $7.5 billion to maintain the Halifax-class ships.

It split the initial $1.5 billion in maintenance spending equally between Irving, the Chantier Davie shipyard in Quebec and Seaspan in Vancouver.

The federal government said last year that each shipyard would have the opportunity to receive a minimum of $2 billion in maintenance contracts until the Halifax-class frigates reached the end of their life cycle.

The exact amount each shipyard receives will depend on several factors, such as ship condition and performance.

Fleetway Inc. contract is valued at $72.6 million over six years, with options to extend it into the 2040s when the next generation of warships built by Irving Shipbuilding in Halifax are completed.

"This contract will secure an expert team to store and manage thousands of critical ship documents, in addition to producing complex designs to support the installation of new equipment on board the ships," National Defence said in a Monday news release.

"Their specialized knowledge and skills will make sure key information is up-to-date to support maintenance teams, and will enable the maintenance of the Halifax-class operational capability in support of CAF missions."

The new in-service support contract will replace an existing Fleetway Inc. contract expiring in October 2020 and will "sustain" 140 jobs, the government said.

"By investing in our fleet of Halifax class frigates, we will be able to provide our members in uniform what they need to continue advancing peace and security around the world," Minister of National Defence Harjit Saijan said in a statement.

The new contract was awarded through an open, fair and transparent procurement process, the government said in its release.

In 2011, Irving was selected to build combat ships under the National Shipbuilding Strategy.

They will replace the Halifax-class frigates, which were introduced into service in the 1990s.

Work on the new warships is expected to begin at Irving in the early 2020s.

By submitting a comment, you accept that CBC has the right to reproduce and publish that comment in whole or in part, in any manner CBC chooses. Please note that CBC does not endorse the opinions expressed in comments. Comments on this story are moderated according to our Submission Guidelines. Comments are welcome while open. We reserve the right to close comments at any time. 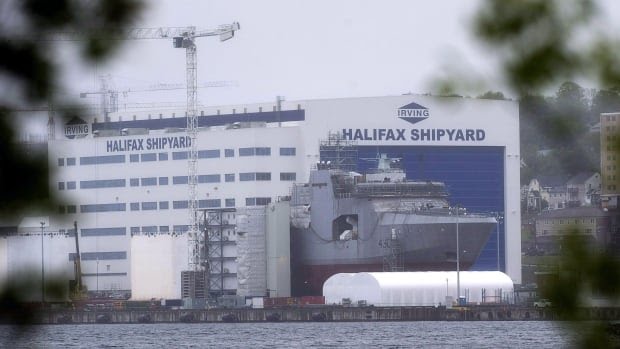