Davie has launched the National Icebreaker Centre (NIC) reflecting its leadership role in the rejuvenation of Canada's entire icebreaking fleet under the National Shipbuilding Strategy.

The NIC confirms Davie as Canada's trusted partner and an international leader in the design, engineering and construction of ultra-modern, multifunctional, environmentally responsible polar and ice-capable ships. The NIC will also support and galvanize a community of thought leaders on the future of the Arctic maritime region, while showcasing Canadian ingenuity and innovation on the world stage to rival Scandinavia.

Davie has been a leader in creating best-in-class ships for the Arctic since the early 1950s, when it delivered Canada's most powerful icebreakers. More recently, Davie has built an array of ships with high ice-class ratings, from complex subsea construction ships to North America's first two LNG-powered ferries. In 2018, after an interim conversion, the CCGS Captain Molly Kool became the first new icebreaking asset delivered to the Canadian Coast Guard (CCG) in more than 25 years.

Davie has been chosen as Canada's icebreaker partner under the National Shipbuilding Strategy (NSS). It will deliver thousands of jobs and major economic benefits to Québec and Canada. Its multi-ship pipeline of polar and ice-capable ships, to be delivered over 20 years, will create a hub of expertise leveraging the combined know-how of Davie and thousands of domestic suppliers. Their efforts will support over $40 billion of year-round maritime trade along the St. Lawrence as well as national sovereignty and security interests, community resupply missions and research in Canada's North.

Moreover, Davie is Canada's only shipbuilding facility with the capacity, infrastructure and experience to begin work today on the world's most powerful hybrid diesel-electric polar icebreakers. Davie has pledged to deliver the first of two polars, the replacement for the CCGS Louis St Laurent, 2.5 years ahead of the current schedule.

Davie is also targeting exports. Over half of the world's icebreaker fleet is more than 40 years old and demand is outstripping supply from new commercial entrants as well as the continued renewal of many state assets. Increased activity in other harsh environments such as the Antarctic also offers sizeable potential markets for Davie's technologies.

Finally, the first-ever Davie Dialogue entitled "The Canadian Arctic in 2050" will be staged later in 2020 with Arctic360, Canada's only Arctic-specific think tank. The event will bring together stakeholders and thought-leaders from Canada's north and south to debate and envision what marine assets and infrastructure are needed to drive future economic and social development in Canada's Arctic, which is being transformed by climate change and shifting geopolitics. Davie and Arctic360 will share more details on this event soon.

"Davie's National Icebreaker Centre puts Canada in the global vanguard of ultra-modern, versatile and sustainable polar and ice-capable vessel construction. Trailblazing ships such as the Polar and heavy Program icebreakers will benefit all Canadians by supporting our economy, protecting our sovereignty and national security as well as our precious environment." James Davies, President & CEO, Davie Shipbuilding

"The National Icebreaker Centre is Canada's polar hub. Building and sustaining Arctic vessels is in our DNA and it's the challenge we've risen to given the physical location of our shipyard. With the launch of the NIC we are proactively developing a centre of excellence for polar technologies. Constructing the entire Canadian polar icebreaker fleet at Davie will ensure program success." Alex Vicefield, CEO and Chairman, Inocea Group 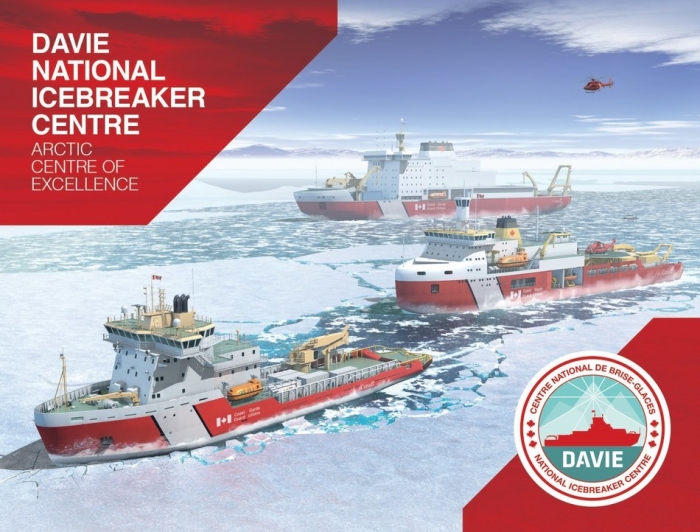