The next hot pandemic technology for businesses? Virtual and augmented reality

Pandemic lockdowns have prompted businesses, governments and other organizations around the world to rethink what they do in person – and both augmented reality and virtual reality startups are surging ahead in the race to replace or replicate real life.

What was once a niche slice of the tech sector is suddenly a considerable market, with Canadian companies racing to take advantage. The retail, real estate and resource sectors are embracing it, while companies of all kinds are using it for workplace training and medical professionals are adapting it into both training and remote work.

The market research firm Future Market Insights forecast this month that the mobile augmented reality market alone would be worth US$3-billion by the end of this year – and US$24-billion by 2030, with a compound annual growth rate of 23.2 per cent.

Surepoint Group, an industrial contractor based in Nisku, Alta., has been using VR-AR “mixed reality” Microsoft HoloLens headsets for more than a year already to troubleshoot problems at remote sites. The headsets allow on-site staff to send video to centralized experts, who in turn can beam holographic images into the headset to help solve the problems, minimizing travel and preventing project delays.

But the pandemic prompted Surepoint staff to use the headsets for other purposes, too, including giving clients project updates from afar because they can’t travel. Soon they realized that same gear could allow people in remote communities to get access to health specialists who can’t be there in person. The company has since launched a whole new business line to get its gear to these communities.

Chief executive officer Trevor Muir is now a VR and AR evangelist: “It’s actually easier to think of cases you couldn’t use it for, because what you can do is unlimited.”

The company’s HoloLens headsets include software made by Fredericton’s Kognitiv Spark that eases data transfer even when a person is so remote that they have a single bar of reception on a 3G network, Mr. Muir said.

By exchanging and visualizing information to solve problems in extremely remote locations, Kognitiv Spark’s Remote Spark software can drastically reduce travel time and budgets, its CEO Yan Simard said. Though that value proposition was enticing before the pandemic, it’s skyrocketing now: Mr. Simard expects revenue to jump by a factor of four – maybe even five – this year versus last.

“I think we’re at the beginning of a big trend where mixed reality is going to be embedded more and more in industrial work,” Mr. Simard said.

Many of the major players investing in augmented reality and virtual reality are the usual West Coast U.S. heavyweights – including Amazon.com Inc., Apple Inc., Qualcomm Inc., Google parent Alphabet Inc. and Microsoft Corp. Among those making the biggest use of the technology are real estate companies, who are doing virtual stagings and open houses to give prospective buyers pandemic-safe home tours, and e-commerce operators. Some Shopify Inc. web stores now let shoppers project 3-D images of products such as bikes in front of them using mobile devices.

The mobile ad-technology company Native Touch was gearing up a new AR product last winter when the pandemic struck.

Revenue plummeted for the Montreal- and Toronto-based company as clients pulled out and took their ad spends with them, so staff accelerated their hunt for customers who’d want AR ads. Eventually, Native Touch connected with Clearly, the French-owned, Vancouver-based eyewear maker that lets prospective buyers virtually “try on” its glasses on its website – and offered to extend that ability to its advertisements.

This summer, the two companies rolled out ads that allowed people who saw the Clearly ads on mobile devices to try on three different kinds of glasses right in the app. The result was much higher engagement, said Native Touch CEO Saad Uddin – like taking a car for a test drive before even visiting a showroom. Ad viewers who “tried on” the glasses were 10 times more likely to visit Clearly’s web store.

After early pandemic layoffs, Native Touch is now hiring again, and speaking to clients in a variety of industries. “Everyone is getting ready to push their digital budgets,” Mr. Uddin said.

The boon in AR and VR extends to training opportunities, too. “As businesses push classroom training to the wayside, this is a way to do collaborative learning remotely,” said Lorne Fade, co-founder of Toronto’s VR Vision Inc.

Though the four-year-old company has developed VR systems that allow seniors and people unable to travel to try “bucket list experiences,” it’s spent much of the past two years focused on immersive training.

That includes fire-safety training and hazard identification training with VR headsets, the latter of which Mr. Fade says his company provides for a large auto company. Inbound calls have tripled since the pandemic began as companies increasingly seek ways to train staff remotely, he said: “VR allows you to physically re-enact tasks, so it works really well for training efficacy.”

This shift has also prompted changes to medical training. The Vancouver company Precision OS Technology Inc. launched in 2017 to help orthopedic surgeons with training. The company uses Facebook’s Oculus Quest headset to simulate surgeries in a virtual environment. “We never had the ability to fail in a safe, low-risk environment,” said Danny Goel, its CEO and an orthopedic surgeon himself.

The pandemic, he said, has forced a reduction in the number of people who can enter many operating rooms, preventing some health care professionals from real-life training opportunities. As a result, the company has since expanded into orthopedic surgical nurse training, too. Virtual reality, Dr. Goel said, “is going to help drive a major change in how we think about education in health care.”

Your time is valuable. Have the Top Business Headlines newsletter conveniently delivered to your inbox in the morning or evening. Sign up today . 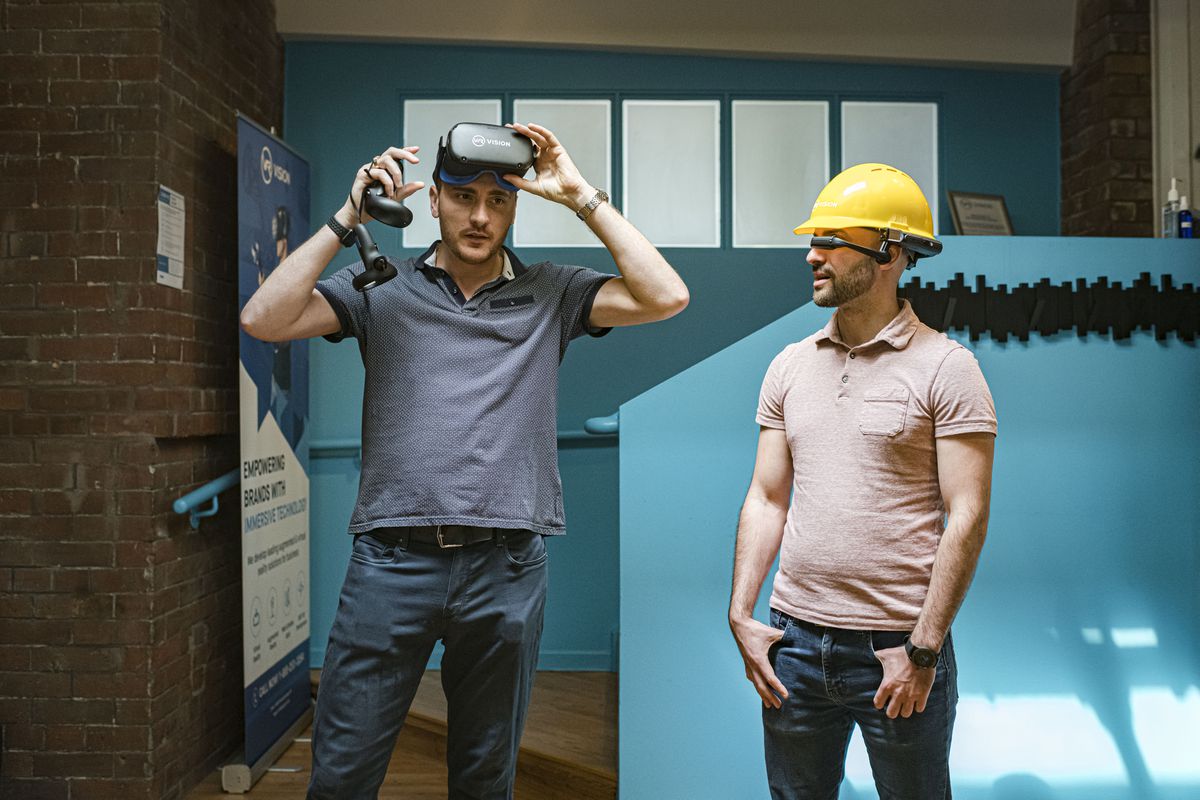